Wind and wave power are my two favourite renewable technologies but they both sit at very different ends of the investment spectrum. As we all know wind power is now a significant contributor to the UK’s energy mix and I hope it will continue to increase its market share. Wave on the other hand is still very much at the development and testing stage with only two sites currently commercially operating. Wave and tidal power have really not quite made it onto the main political stage as a major solution provider for our energy needs.

As you might imagine, wave and tidal power is one of the UK’s biggest assets, being an island we have great potential to harness the power around our shores. However wave power is notoriously expensive, hard to install and the process full of regulatory challenges. According to an ar 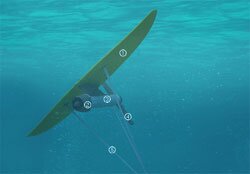 ticle in The Engineer magazine, the UK and Ireland have the potential to provide 20-25% of total European marine energy and could be worth £6.1billion to the UK economy.

What I do find exciting about this area of renewable energy is that there are many companies working on developing new solutions to harnessing the power of our waves and there are already many differing techniques of energy capture. Some of the more notable solutions include:

Most of these solutions require high velocity currents to maximise energy output however a company called Minesto may have created a system which can work in lower tidal velocities in a cost efficient way.

The Deep Green is essentially a wing and a turbine which moves in a figure of eight formation. It is secured to the sea bed and due to its design can move 8-10 times faster than the current it is situated in. If proven the Deep Green could open up many more locations for tidal energy production.

The company is currently due to release a 3MW array in 2015 and a 10MW in 2016 to further prove commercial viability. I wonder whether this could be the boost that the wave and tidal power industry needs to secure more investment and move towards a more significant impact on the UK’s energy mix – only time will tell.

In order to attract developers and investment, the wave and tidal power industry has to offer a cost effective solution which has commercial viability and of course, enough power generation to make a difference.