Wind turbines convert the kinetic energy from the wind into mechanical energy which is then used to drive a generator that converts this energy into electricity. The UK has more usable wind power than any other European country and large scale wind turbine farms on and offshore will become a major supplier of electricity to the national grid in the next twenty years. 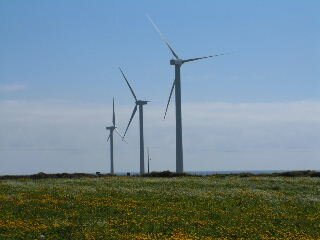 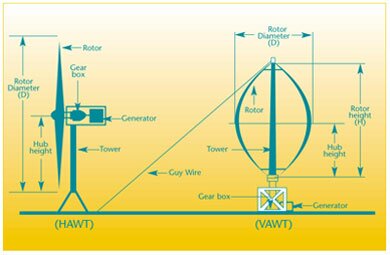 Vertical axis turbines do not need orientation into the wind, although the earlier versions, sometimes known as ‘eggbeater’ turbines required a power source to start rotating because of their high torque. More recent innovations have helical blade designs that have low torque and can operate without external power. Vertical axis turbines are particularly suited to small wind power applications because they have a small environmental impact and no noise, but have not yet scaled up to the 5MW + turbine size of horizontal axis designs.

If you are interested in the internal workings of a wind turbine the Danish Wind Industry Association has a clear and comprehensive description at www.windpower.org/en

Modern large scale wind turbines have rotor diameters in excess of 100 metres, tower heights in excess of 300 feet and are substantial structures weighing hundreds of tonnes. These projects require very large capital investments and lengthy periods of planning approval including local consultation and impact assessment on the environment, aviation, aesthetics and wildlife.

There has been a lot of recent publicity about onshore wind turbines with MP Peter Luff campaigning for minimum proximity distances to dwellings from proposed turbines.

Electricity generators have a financial incentive to invest in large-scale wind generation as the government has set a requirement that all UK power suppliers must source a rising proportion of their energy from renewables, currently 7.9% rising to 20% in 2020.

Because the UK has a large shallow continental shelf, the sea around our coasts is particularly suitable for offshore wind farm projects. Up to 12 nautical miles from the shore the seabed is owned by the Crown Estate who can grant leases for developments. Outside the territorial limit, similar considerations will apply in the Renewable Energy Zone, created under the Energy Act 2004, where the Crown Estate will issue a licence to develop a wind farm rather than a lease.

For example, the London Array, a joint venture between E.ON UK Renewables, Shell Wind Energy Ltd and CORE Ltd will have a capacity to generate 1,000 MW of electricity from 341 turbines and is to be constructed in the outer Thames estuary over 20km from the Essex and Kent coasts. This array which is scheduled to start operations in 2010 will have a capacity to supply the power requirements of a quarter of the homes in Greater London. Politically, a project this size could not be sited onshore anywhere in the Home Counties.

Within the next 12 years, the seas of Britain could have enough wind farms to power every one of the country's 25 million homes.

Harnessing the vast potential of the UK's island status has entered a new phase with Energy Secretary John Hutton announcing in December 2007 proposals to open up its seas to up to 33 GW (gigawatts) of offshore wind energy.

Small scale wind turbines are particularly suited to off grid, mobile and combined wind & PV applications. The PV/wind power combination is effective because wind power availability is highest in winter when available solar power is at its minimum and vice versa

Small scale wind turbines vary in size with a range of models available, from less than 100 watts (W) up to 50 kilowatts (kW).
Smaller, less than 100W, microturbines, are often used to charge 12 volt (V) or 24V batteries, for use on stand-alone systems.

Turbines ranging from 0.6kW to 50kW can be used to provide electricity generation for individual houses and businesses, with rooftop models varying from 0.5kW to 2.5kW in size.

For maximum efficiency, turbines require a smooth flow of air over the rotor blades at a constant speed. Ideally a turbine should be sited on the top of a hill with a gentle south-westerly slope (the direction of the UK’s prevailing wind). Obstructions such as trees or buildings will cause turbulence in the wind flow.

The efficiency of a turbine increases dramatically with small increases in wind speed and turbulence increases the wear and tear and thus the maintenance requirements. Commercial turbines are sited on tall towers to avoid turbulence that occurs lower down (wind shear) and take advantage of the higher wind speeds higher up, so it makes sense to consider siting your wind turbine as high as you can within your budget and local planning constraints.

Static wind turbines need explicit planning permission. Discuss your plans with your local authority before committing to the project especially if the proposed site is on a listed building or in a conservation area, National Park or AONB.

However, in July 2006 the Housing Minister, Yvette Cooper announced that from 2007 changes to planning laws will allow householders to install small scale wind turbines without planning permission - as long as they do not impact on neighbours.

The government's Planning Portal website gives guidance on planning for domestic renewable projects. A link to it can be found in Government Departments.

To install a grid-connected system, you will need permission from the local Distribution Network Operator (DNO). This is the company who operates the distribution network in your area, and may not be your electricity supplier. DNOs have different policies when it comes connecting small scale renewable generation systems to their networks. To find out who your local DNO is visit the #ext,www.pv-uk.org.uk:British Photovoltaic Association website, from where you can also download application forms for DNO permission.

You will need an inverter to transform the low-voltage DC power produced by a wind turbine into high-voltage AC power that meets the quality requirements of the electricity network.

Look for inverters that meet the Engineering Recommendations G83/1 - 'connection of small-scale embedded generators in parallel with public low-voltage distribution networks', which sets out technical requirements that small-scale generators need to meet in order to connect to the mains network. These are only recommendations, but as they have been agreed by the DNOs, applications that conform are usually processed more quickly.


What to do next

Contact one or more Small Scale Wind Turbine Suppliers or Wind Farm Designers & Consultants for feasibility advice for your project.